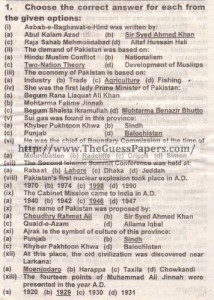 (xiv) The national anthem of Pakistan is the creation of:
(a) Allama Iqbal
(b) Faiz Ahmed Faiz
(c) Hafeez Jhalandari
(d) Josh Malihabadi

(ii) Describe any five Islamic provisions of the constitution of SAARC.
The Constitution of the Islamic Republic of Pakistan is the supreme law of Pakistan. Known as the Constitution of 1973, it was drafted by the government of Zulfikar Ali Bhutto and, following additions by the opposition parties, was approved by the legislative assembly on April 10, 1973. Islamic provisions:
(1) The name ‘Islamic Republic of Pakistan’ is selected for the state of Pakistan.
(2) Islam is declared as the state religion of Pakistan.
(3) Steps shall be taken to enable the Muslims of Pakistan, individually or collectively, to order their lives in accordance with the fundamental principles and basic concepts of Islam.
(4) Steps shall be taken to make the teaching of the Qur’an and Islamiyat compulsory, to encourage and facilitate the learning of Arabic language and to secure correct and exact printing and publishing of the Qur’an.
(5) Proper organization of Zakat, waqf and mosques is ensured.

(v) State any two initial problems faced by Pakistan at the time of its emergence.
ANSWER: Please see Q. 2(viii) of 2013 Private

(vii) Describe any two Natural Resources of Pakistan.
Coal: Pakistan recently discovered one low and four lowto- medium quality coal seams in the Punjab. Low sulfur coal w=as recently reported at the Baluchistan and near Islamabad. Bituminous, sub-bituminous, and lignite coal have been found in Pakistan. Coal reserves are estimated at 175 billion tons.

This would equate to 618 billion barrels of crude oil. When compared to oil reserves his is more than twice the amount of
the top four countries. If At KSA’s current usage, the reserves would last more than 200 years.

Oil and Gas: Natural gas production is at a high level in Pakistan. Estimated reseryes are 885.3 billion cubic meters (as .of January 2009). Gas fields are expected to last for another 20 years. The Sui gas field is the largest, accounting for 26% of Pakistan’s gas production. Daily production is 19 million cubic meters a day. Under the barren mountains of Baluchistan and the sands of Sindh, there are untouched oil and gas reserves.

3. Describe the silent features of the Culture of Pakistan.
ANSWER: Please see Q. 5 of 2013 Private

4. Describe the important political events from 1940 to 1947 for the creation of Pakistan.

Following are the important political events between 1940to 1947.
1. Offer of 8th August 1940:
Viceroy of India Lord Linthgo announced an offer on Aug.8 1940 for the Indians for increase in the administrative council and implantation of unanimous constitution in that offer. The aim of that offer was to take the Indians in confidence to win the World War II. But’ congress and Muslim league both rejected it.
2. Cripps’Mission:
After the failure of the offer, the British Government . appointed Sir Stafford Cripps Minister for India who announced on March 29 1947 formation of the government constituent assembly, securities of minorities, and provincial autonomy, which was rejected once again.
3. Quit India movement of Congress:
On August 07,1943, under the leadership of Gandhi Congress announced its quit India movement. Muslim league and British Government both opposed it. Govt. arrested Gandhi and other leaders of Congress.
4. Jinnah-Gandhi talk:
The failure of above two made it clear that without Muslim League, success was impossible. So Gandhi himself talked to Quid-e-Azam in September 1944. These talks failed due to stubbornness of Gandhi because he is not accepting Muslim a separate nation.
5. Lord wavell plan:
The constitutional crises from 1940to 1945 made it clear to the British Government that independence of India was a must. So Viceroy of India Lord Wavell presented a plan of independence of India on June 14 1945

6. Simla Conference:
To act upon the Lord Wavell plan all parties conference was held at Simla from June 25 to July 14 1945.The aim of the conference was to get the support of all the parties included in he caretaker Government. Due to Muslim not given proportioned representation, Muslim League made that plan unsuccessful.
7. Elections of 1945-46:
To get rid of failure of Simla Conference elections were held in the winter of 1945-46, In these election Muslim League got 100% success in t e centre and 98% in the provinces. These elections brought the creation of Pakistan close.
8. The Delhi Resolution:
After the elections of 1945-46, a convention of elected Muslim members was held in Delhi. In that convention Hussain Shaeed Suharwardi presented a resolution on April 9, 1946 for the creation of Pakistan as soon as possible.
9. Cabinet Mission Plan:
After knowing the popularity of Muslim League, the British Government a mission of its cabinet members to prolong its rule on India. They announced there mission on May 6, 1946, making India an autonomous union divided into groups of Hindus, Muslims. Anyhow, this mission was also failed due to Congress and Muslim League conflicts.
10. Dayof action of Muslim League:
According to the Cabinet Mission Plan, Congress and Muslim League were to be. given equal representation. Congress demanded more representation by opposing it. Government agreed to give more seats to congress to get the support of it. On that Muslim League as a protest started a day of action on August 16, 1946. Due to that Hindu Muslim riots started. At last government agreed for equal representation.
11. Formation of care taker Government:
In the beginning, the British Government gave Congress more seats then was suggested in caretaker government of September 22, 1946, whiJe Muslim League called it a Black .Day. Due to the strong opposition of Muslim League, at last government gave equal representation on October 26, 1946. The differences of the leaders of Congress and Muslim League caused the ending of that government.
12. Indian Division Plan of June 3,1947:
British Government sent Lord Mount Batten in Place of Lord Wavell as the Viceroy of India. In the beginning he tried for united India. At last because of fruitless effort, he presented the division plan of India. According to that plan the British rule was to ed by 10th August 1947 and India was to be divided into free Pakistan and Indian states.
13. Indian Independence Act:
The British Government gave a legal form to the division plan of India after accepting it with some amendments of July 18,-1947.Hence Indian Independence Act was made.
14. Redclifff Award:
According to the Indian Division Plan two Boundary Commissions were appointed for the division of Punjab and Bengal on sectarian grounds. Their joint heads was a British Lawyer Sir Cyril Redcliff. That is why the report of the Boundary Commissions was called Redcliff Award.

5. Discuss the role of Urdu for national integration of Pak.
ANSWER: Please see Q.4 of 2014 Regular