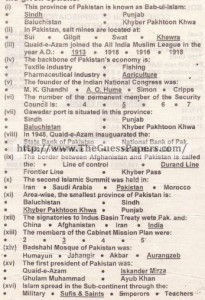 (xviii) Karakoram Highway was built with the help of:
• the U.S.A.
• China
• Iran
• Turkey

2.(i) Explain the Two Nation Theory.
There are two nations Muslims and Hindus in India. Their religion, culture and philosophy of life are different The two nations cannot live together due to the basic difference given above.

(ii) State the Educational Services of Sir Syed Ahmed Khan.
After the battle of freedom of 1857, the economic, political and social conditions of Indian Muslims became very precarious because they were the victim of revenge and punishment of both British and Hindus. Sir Syed had realized that Muslims would not progress so long they would acquire English education. He, therefore, established many schools and scientific societies to importing English education on Muslims. He did the following things to improve the educational standards:
(i) In 1859 opened a school in Muradabad.
(ii) In 1863 founded scientific society in Ghazi pore.
(iii) Opened a school in Ghazi pore in 1864.
(iv) Made a committee to raise funds for new schools.
(v) Set up Mohammedan educational conferences in 1866 to raise the standards of education.
(vi) Set up Mohammedan Anglo Oriental school in Aligarh on 24 May 1875.
(vii) In January 1877, Mohammedan Anglo Oriental College was inaugurated at Aligarh.

OR What is the role of Pakistan in UNO?
Pakistan officially joined the United Nation on 30 September 1947. Pakistan fully endorsed the United Nations objectives. The principles and objectives of the UN have served as the important guidelines in the formulation- of the Foreign Policy of Pak. Pakistan supports the resolution of all international and regional disputes in the light of UN principles aiming at formation of peace and-unity in the world. Pakistan has been elected a number of times into the UN
Security Council. Pakistan envisages a world which is free of want, hunger and deprivation’. The Pakistani military has played a key role in the UN’s peace keepings programme in different parts of the world, most prominently in Somalia, Sierra Leone, Bosnia, Congo and Liberia. Currently, Pakistan stands as the largest contributor of troops to United Nations peacekeeping missions in the world.

(vi) State the Religious influences of Islam on the Hindu society of sub-continent.
Islam was universal religion. Islam and Hinduism basically differ in their attitude toward life. Islam strongly believes on the equality of mankind before law. It does not see any distinction among the people on score of such inhuman principles as caste, creed and social position. Hinduism, on the other hand, believes in the multiplicity of gods and is based on the unethical caste system which had divided the society into privileged and under privileged classes. Some Hindu leaders were highly influenced by Islamic teachings and values, they started advocating the Islamic principles of love, equality, brotherhood and oneness of God. The Muslim scholars wrote books and explained the teachings of mysticism and Islam. They mystics played a positive role in the preaching and spread of Islam. Th.,.eir pure and pious Iife high character and fine dealing with people attracted many towards them.

(viii) What is the importance of Agriculture in the economy of Pakistan?
ANSWER: Please see Q. 2 (iii) of 2013 Regular

3. Explain the role of the All India Muslim League in the establishment of Pakistan.
ANSWER: Please see Q. 5 of 2014 Private

OR What problems were faced by Pakistan soon after its establishment?
ANSWER: Pleas~ see Q. 5 of 2014 Regular

4. Describe the salient features of the Culture ‘of Pakistan.
ANSWER: Please see Q. 5(or) of 2014 Regular

5. Explain the basic principles of the Foreign policy of Pak.
ANSWER: Please see Q. 4 of 2014 Private