1. Choose the most appropriate answer for each from the given options: 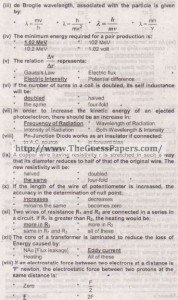 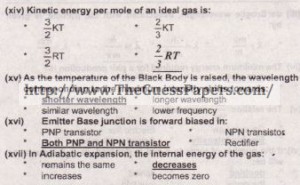 2.i) In how many ways can ‘Y- rays produce ionization of Atoms? Explain.
Gamma Rays Produce Ionization of Atom: When r – rays encounter matter, they produce ionization or loss energy by three process
(a) Photoelectric effect,
(b) Compton effect,
(c) Pair formation.
(a) In Photoelectric effect: γ rays is completely obsorbed, that is it
loses all its energy in a single encounter. It takes place when energy of γ – rays is less than 0.1 MeV.
(b) In Compton effect: γ – rays is scaltered by an atomic electron transferring some of its energy to the electron. It may lose only a part of its energy in an encounter ..The probability of this process increase for y – rays in the range 0.1 Me to ‘.0 MeV.
(c) In Pair Production: γ – rays photon, in the vicinity of a nucleus is converted into a pair of electron and positron. Thus annihilation of r  rays take, In fact, very few high energy r – rays photons may impinge directly on heavy nuclei. This process dominates when the energy of γ – rays is greater 1.02 MeV. The ionization power of r – rays is less than that of a or ~ – particles.

ii) Explain the formation of potential barrier in Pn Junction.
p-n junction: If one part of intrinsic semiconducting crystal is doped with a trivalent impurity and the other part with a pentavalent impurity, a boundary junction is formed between the resulting p-type and n-type portions. This ‘is known as semiconductor diode. It is a two terminal device, symbolically .represented as

The arrow in the symbol points in the direction of conventional current.

Formation of Potential Barrier: In a p-n junction, the n-type region has high concentration of free electrons while p-type region has many holes. At the instant of the p-n junction formation the free electrons near the junction in the n region begin to diffuse across the junction into p region and the holes into n region. This phenomenon is called diffusion. When p-n junction is formed n region loses electrons and a positive charge is built on the n-side. At the same time p region loses holes as electrons and holes combine and a negative charge is established on p-side. This created two layers of positive and negative charges called depletion region.This depletion region acts as a barrier for further movement of electrons across the junction and is known as potential barrier or junction potential.

iii) Why does Hydrogen spectrum contain a large number of spectral lines although it has only one electron?
spectrum of Hydrogen Atom: When an electricity discharge is passed through elements in gaseous state, the emit radications which consist of a set of particular frequencies, called spectrum. each of which is well-defined and is determined by a spectrometer. Some facts are given as below:
(a) Each element has it own ‘characteristic’ spectrum. Thus the spectra of no two elements are alike.
(b) The spectrum of a element consists of a number of series. These are called optical spectra.
(c) All the series of spectra are similar in general appearance. They differ is number of lines and location in optical region.
(d) In a typical series, the spectras lines are well-seperated at one end. The separation decreases rapidly and towards the other and it becomes ranisbigly small,called “series limit”. Beyond the series limit, the diserte spectrum becomes continuous.
(e) Hydrogen is the simplest atom. Its spectrum was studied enthusiastically. In its spectrum five series were obserbed. Physicists tried to obtain an “empirical formula” (The formula that has no theorical jusrification, but still it explains all the observed facts). Balmer succeeded in obtaining an empirical formula for’ series in the visible region. It predicts all the wavelengths of the lines in this series with remarkable accuraey. The formula for the wave numbers of the spectral lines of the so – called “Balmer series” is:

iv) What is transformer? Name its components and describe its working.
Transformer: A transformer is device that transfers electrical energy from one circuit to another, and converts alternating current at high voltage into law voltage and vice versa.
Principle: When current is changed in coil (called primary coil), its chaning flux introduces an e.m.f. in a neariby coil (called Secondary coil). This phenomenon is known as “Mutual induction”.
Contruction: It consist of the following part.
(a) Two Coil: Two coil of copper wires well insulated from each other are wound on a soft-iron core. The coil to which electrical energy is supplied is called the “primary coil” and that from which energy is delivered to the outer circuit is called the “Secondary coil” They are magnetically linked.
(b) Core: A.laminated core of specially alloy ot steel of high resistance and law hysteresis lose is used. Each lamination is insulated from the other by varnish or enamel to reduce energy loses.
Working: Let an alternating e.m.f. Vp be applied acrose the “primary coil”. The resulting current 10 gives rise to a varying flux in the core. This varying flux induces an opposing e.m.f. in the primary coil (which is equal to the applied voltage if resistance of the coil is negligible) Hence Vp is given by the flux linkage. Using Faraday’s law, we have 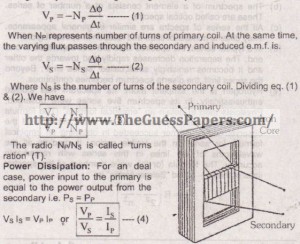 Thus currents are inversely proportional to the respective voltages. Hence voltage is raised at the cost of reduction in current.

v) Define Nuclear Fission and Nuclear Fusion reactions. How can the fission chain reaction be controled? Name the process which produces energy in the sun and in nuclear reactor.
Nuclear Fission:
Nuclear fission occurs when a heavy nucleus, such as 92U283 splits into two smaller nuclei. In such a rection, the total rest mass of the products is less than the original rest mass.
Nuclear fission was first observed in 1939 by Otto Hahn and Fritz Strassman, following some basic studies by Fermi. These scientists discovered two medium mass elements among reaction products, namely Barium and Krypton.
Lisa Meimer and Otto Frisch explained that Uranium nwcleus had split into two nearly equal fragments after absorbing a neutron. Measurements shbwed that about 200 MeV of energy is released in each fission. event.
Chain Reaction:
A number of physicists, including Fermi, recognized that the neutrons released in each fission could be used to create a chain reaction. One neutron initially causes one fission of a uranium nucleus. The two or three neutrons released can go on to cause additional fissions, so the process multiples.
If a self-sustaining chain reaction was actually possible in practice, the enomous energy available in fission could be released, in the atomic bomb.
Fermi and this co-workers at the University of chicago showed that it was possible to control chain rection, by constructing the first nuclear reactor in 1924.
At a practical level, energy from one fission is, of course, tiny, However, a large amount would be available if many such fissions could occur at once. This energy could have wider applications in our daily life.
Moderators:
Neutrons producetl in a fission reactions are about 10,000 times as fast as slow moving neutrons required for this reaction. Therefore these neutrons must be slowed doen to increases their probability of starting the chain reaction.
A substances known as moderator must be used to slow down the neutrons. The most effective moderator will consists of atoms whose mass is as close as possible to that of neutrons.
Heavy water which contains deutrins ,H2 or graphite is generally used as moderator.
The Slowing down of the neutrons by the moderator serves the dual purpose of making them available for reactin with U235 and decreasing their chance of being captured by U238 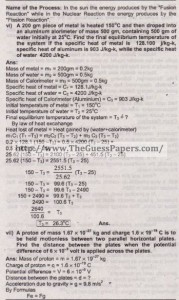 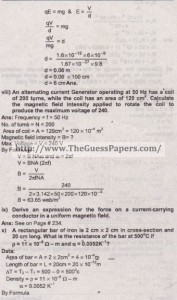 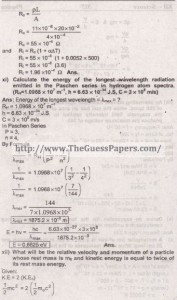 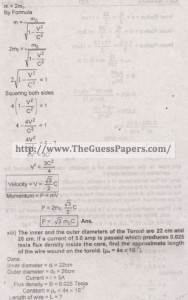 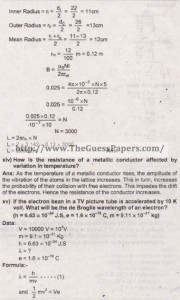 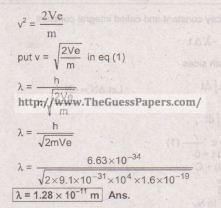 3.a) What is Carnot engine? Describe its construction, working and derive an expression for its efficiency.
Ans: See on Page # 275.

b) Define radioactivity. Explain the law of radioactive decay. Write the equation showing the change in the parent nuclei by α,β and γ decay.
Radio Activity: The nuclei of heavy elements (having atomic number Z 2: 83) are unstable ans they emit radiations spontaneously. This phenomenon is called “radioactivity”. And the substance are called “radioactivity”. This phenomenon was discovered by Becquerel in 1896 in 1898 Prof. Prene curie and madan curie (Marya Sklodwska) investigated radioactivity (Examples of radioactive elements are uranium, thoriur .., polonium plutonium, radium and radon etc. Of thorium ad discovered polonium and radium,)
(i) Radioactive Decay: In nature the unstable nuclei decay by the emission of a or P particles, which may be accompanied by y – rays. The process by which a, p or y – rays originate from with in the nucleus of an atom is called radioactive transformation (decay) or radioactive transformation.
Law of Radioactive Decay: The rate of decay is proportional to the number of neclei that have not yet decayed 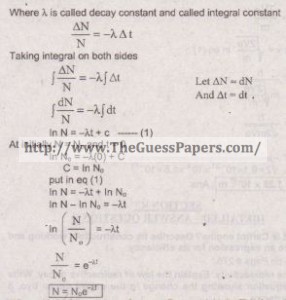 Where No is the number of atoms, Present initially This law shows that neclei disintegrate expermentially.
(ii) Alpha Decay: In case an unstable nucleus decays by the emission of a particles, its charge number ‘Z’ decreases by 2 and its mass number ‘A’ decreases by 4. The transformation is represented by the equation.

(iii) Beta Decay: (a) Electron Emission (b-,decay). In case an unstable nucleus decay by the emission of p-particle, its charge number ‘Z’ increase by 1, but its mass number ‘A’ remain uncharged. In p-decay.

This is called “negative beta decay” or “element emission”. It is more common than a-decay.

(iv) Gamma Decay: Gamma rays are high frequency electron magnetic waves. The emission of y – rays photon causes no charge in Z and A (or . N) A nucleus with excess energy (called excited nucleus or isomer) undergoes y – emission following the emission of a or p – particles. Gamma rays are emitted by the product nucleus, and not by the parents nucleus.

4.a) What is a capacitor? Derive the expression for the capacitance of a parallel plate capacitor when.

(i) Air exists between the plates
(ii) Space between plates is partially filled by a dielectric medium
Ans: See on Page # 242.

b) Give the construction and working of a moving coil Galvanometer. Show that current I is directly proportional to the angle of twist. On what factors does the sensitivity of Galvanometer depend?
See on Page # 247.

b) State Coulomb’s, Ampere’s and Gauss’s Law and explain the
phenomenon of mutual induction.
Statement of Coulomb’s Law: The force of atIradid or repulsion between two static point charges is directly proportional to the product of the magnitude of the charges and in proportional to the squares of the distance between them 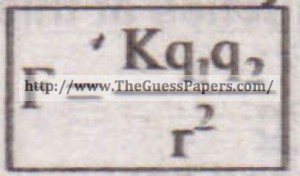 Statement of Ampere’s Law· The sum of the product of the tangential components of magnetic .,1dof induction and the length of an element of a closed curve taken in the magnetic field is penneability (J.Io) times the current (i) which passes thro the area bounded by the curve. 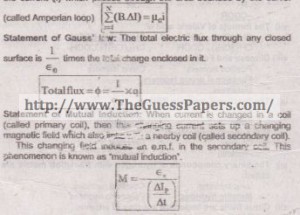