1. Choose the most appropriate answerfor each from the given options:

i) The maximum work done is possible in this process:
* Isobaric
* Isochoric
* Isothermal
*  Adiabatic

(ii) If the area of the plates of a parallel plates capacitor is doubled, the capacitance:
* remains unchanged
* is half
* is double
* is increased four times

(iv) Resisters of 2 ohms, 3 ohms, 4 ohms and 5 ohms are connected in series. If the current flowing through 2 ohms resistor is one ampere, the current throllgh the other resistors
will be:
* 4 ampere
* 14 ampere
* 1 ampere
* 0.1 ampere

(v) According to Einstein’s special theory of relativity, the mass of a particle moving with the speed of light will become:
* zero
* double
* infinite
* ten times

(xi) With the increase of temperature, the resistance of a semi conductor:
* increases
* decreases
* remains constant
* becomes zero

(xiii) This narrow beam from cobalt-60 is used in treating localized cancerous tumour:
* α-rays
* β rays
* γ-rays
*  All of these

(xiv) According to uncertainty principle:.

(xv) The practical application of the phenomenon of mutual inductance is:
* A.C. generator
* transformer
* rectifier
* dynamo

(xvii) AVO meter is used to measure:
* electric current
* voltage
* resistance
* all of these

2.i) You are given three resistors each of 2 ohms. How would you arrange these to obtain equivalent resistance of:
a) 1.33 ohms,
b) 3 ohms and
c) 6 ohms? Verify the results mathematically. 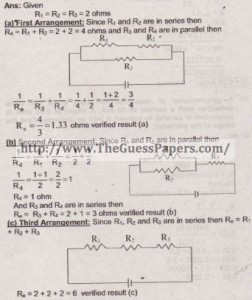 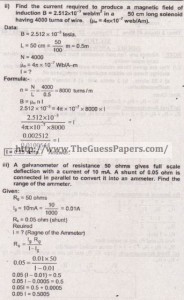 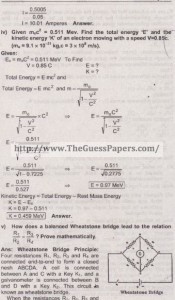 R4 are so adjusted that on closing the Keys K, and K2 no current passes through galvanometer, the bridge is said to be balanced. In this condition galvanometer gives null deflection, and relation between four resistances is given by:

This is known as wheat stone bridge principle.

vi) In what way is the motional emf, produced in a conductor placed in a magnetic field, translated into the relevant mathematical relation?
Ans: See on Page # 266.

In Wilson Cloud Chamber: A chamber contains super cooled vapours in a dust free atmosphere. When radians pass through the chamber, ions are formed, which serve an nucleation centres. The super saturated vapours get condensed on them. So the path shows up a as a fog trail. In this way, the instrument is used to visualize the tracks of charged particles.

viii) Do α, β and y rays come from the same element?’ Why are all these three found in many radioactive substances?
A radioactive element either emits a-partices or ~-particles, but not both. Gamma radiations generally accompany p-emissions and in some cases with a-emission.
A ratioactive element (or sample) is a mixture of various nuclides of different relative abundances and wit~ different modes of distintegration.
Hence we can find all the three in a radioactive sample at the same
time.

ix) What is semi-conductor diode? How is it used for half-wave rectification?
Semi-Conductor Diode: A block of a p-type semi-conductor is put adjacent to a block of n-tYpe semi-conductor the common plane is termed as p – n junction diode. This junction is formed by melting p and n semi-condutors by a special manufacturing process (called “thermo compression proess”). The p-n-junction is extremely thin and is of the order of 10-3mm.
Half Wave Rectifier: When a diode is connected to a transformer the
diode is made positive and it acts as a closed switch. The current flows in the circuit as a pulse of half-sine “wave-form”
During the next half cycle of the transformer voltage, anods of the diode is negative (reverse biased). And it acts as = 1 an open circuit. No current exists in the load (resistance = R) In this way, current flows in one direction. The output across the load is “pulsating d.e.” These pulsations in the output are further Sft’IOothed with the help of “filter circuit” . 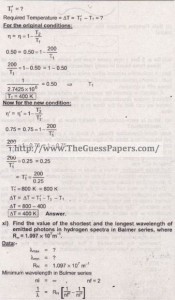 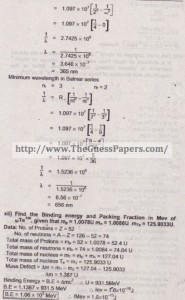 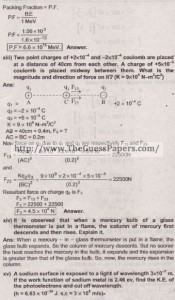 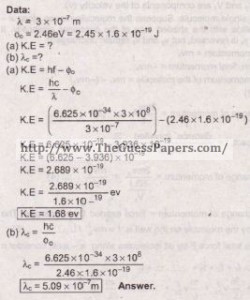 3.a) Derive a relation for the pressure on an ideal gas in terms of its density and mean square velocity.

Interpretation of Pressure of a Gas: 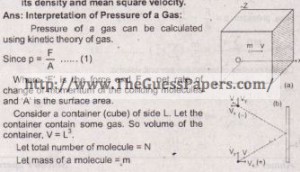 Interpretation of Pressure of a Gas 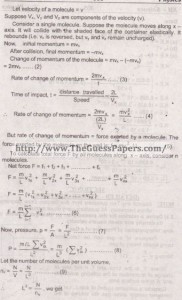 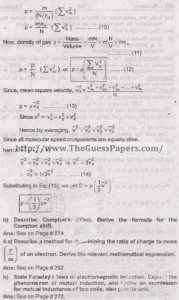 5.a) State the postulates of Bohr’s Atomic theory and derive the
expression for the radius of nth orbit of a hydrogen atom.
Ans: See on Page # 245.

b) State Gauss’s Law. Apply the law to find electric intensity due to a uniformly charged metallic sphere at a point Plying outside the charged sphere.
Gauss’s Law: The relation between electric flux and net charge enclosed by a surface was enunciated by E.E. Gauss (1775 – 1857). a German physicist and one of the greatest mathematicians of all time.
Statement: “The total electric flux through any closed surface is 1/E 0 times the total charge enclosed in it.”
Proof: Consider a closed surface S of some arbitary shape. Suppose it encloses point charge qt, qz, q3•…. qn.
Total charge Ø = Øt + Ø2 + Ø3 + ….. + Øn
To determine flux over the closed surface, it is divided into very small but equal pars, each part being so small that it is almost a plane.

The direction of E and M is thus the same. ,

The total flux will be the algebraic sum of the flux through all the patches.
Ø = Øt + Ø2 + Ø3 + ….. + Øn
Consider flux due to Charge q-. Imagine a sphere with ql as center. The flux through the sphere is the same as through surface S. 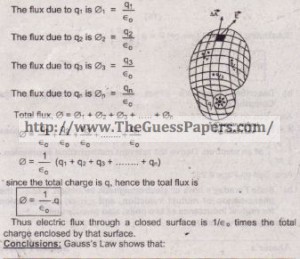 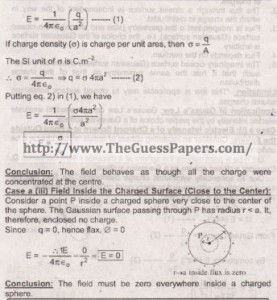